Completion of the Route

With the reception house being built on the summit, the ongoing construction work on the Kehlsteinstraße was continually being hampered. In addition to the fact that raw materials needed to be transported to the building site on the summit, there was also the danger caused by falling rubble and the ongoing disposal of debris.

Despite these difficulties – including that of the tons of rubble dumped down the mountain during the construction of the elevator shaft – the essential work had been completed by the summer of 1938. The melting of the snow during the spring had exposed a number of faults in the road and the support walls, and in April three senior engineers from Polensky & Zöllner – Dr. Leopold Müller, Bruno Schenk, and Hans Weber – were each assigned to oversee a section of the route. Schenk would be tasked with overseeing the longest portion of the route from the Salzburgblick through to the Giggenbachrieße, Müller was put in charge of the middle section up to the Schwalbennesttunnel, while Weber was assigned the final section up to and including the Kehlstein Parkplatz.

When this essential work had been completed, Schenk – seen by many of his contemporaries as the engineer closest to Bormann on account of his more hardline approach to meeting the ever-changing project deadlines – was given overall responsibility for the road: an appointment that clearly suited the Reichsleiter as the project approached the finishing line.

Even after the clearing and stabilisation of the road surface plenty of work still remained. The slopes and walls had to be secured – with every single gap in the rock being identified and filled – and all of the temporary construction huts had to be dismantled and cleared with the sites restored to their former condition. Unsightly quarries had to be cleared, filled with soil and dressed so that they blended into the surrounding area, and trees damaged during the construction work were also removed.

In order for the road to blend into its natural surroundings, there were numerous stipulations made concerning its design and appearance. Natural rock formations were used wherever possible or practical, and at those points on the route where this was not possible the area was dressed with rock quarried from elsewhere on the mountain which was then artificially weathered and colour-matched using a specially prepared hydrochloric acid solution. The acid would eventually blend the colour of the existing rock with the filler material excavated from inside the mountain, and also encourage the growth of moss.

These innovative landscaping techniques, developed by the conservationist Professor Alwin Seifert, would become the standard for similar construction projects thereafter.

Did You Know?Professor Alwin Seifert was influential in the German conservation and farming movements, and was one of the first landscape architects in the country - marketing himself as such at a time when the profession was not officially recognised. As well as the Kehlstein project, Seifert had also been heavily involved with the Autobahnen, and their integration into the natural landscape.

In some cases poured concrete was used to reinforce weaker foundations, and after setting was made to look like natural rock: Bormann wanted something that looked as if it had always been part of the landscape, not an eyesore. While on close inspection some of these Ersatz features can be identified against the natural rock formations, the overall effect is amazing. With over seventy additional years of natural weathering and plant growth, it is now hard to tell what was originally there and what wasn’t.

With all signs of construction having been cleared, work then began on the installation of the safety barriers, nine telephone booths and surfacing. The final laying of the asphalt was overseen by Sager & Woerner, and saw massive twelve-ton rollers take to the road – a task that required both skill and a stable disposition.

The final touches would be hindered by the adverse weather conditions that had seemed to plague the project from the beginning: heavy rainfall hampered the surfacing, and one of the telephone cables between the Sappenkreuz and the Parkplatz was hit by lightning. Nevertheless, all building work on the Kehlsteinstraße had been completed by October 1938: it had taken just thirteen months.

The methods employed in carrying out the project and the techniques used during the both preparation of the road and its construction have become benchmarks for similar projects that have been carried out since: the fact the road has lasted as well as it has with minimal need for repair work is testament to the high standard of engineering.

Did You Know?Between 1960 and 2000, it has been calculated that the Kehlsteinstraße had withstood a total vehicle weight of well over four million tons.

Although the Kehlsteinstraße was constructed to the highest possible standard, safety was and still is an ever-present concern. The road is closed to the public during the winter months, and prior to its being reopened every spring the entire area undergoes a thorough overview, which includes the area being cleared of material loosened by the contracting of the rock caused by the frost and snow.

Of course, before the safety assessment and any repairs can even be carried out, the road needs to be cleared of snow. It is possible for several metres of snow to accumulate on the road during the winter months, and much of it will still be there in the early spring. The annual operation sees a large snow plough and a slightly small slow blower make their way slowly up the 6.5-kilometre road to the summit – an operation that is clearly not for the fainthearted or those without a head for heights!

The map below (click to view full size) provides an overview of the main route from the Hintereck to the Kehlsteinhaus Parkplatz, including all of the five tunnels and key viewing points. While the bus journey provides ample opportunity to see these viewing points, it is inevitable that you will be on the right side for some views and on the wrong side for others. These locations – and the tunnels – are best observed in the evening after the last return bus has departed. 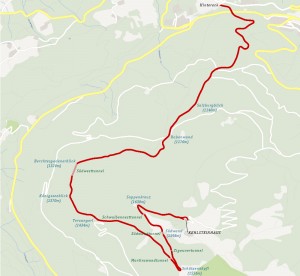 Previous: Construction of the Kehlsteinstraße

This site uses Akismet to reduce spam. Learn how your comment data is processed.